The British city of Leicester invests in 30 bus stops with sedum roofs and wild flowers. This solution is to contribute to increasing the number of bees in urban areas.

To combat the decline in the bee population, the City of Leicester has partnered with Clear Channel to transform bus stops into bee refuges. These green harbors are basically bus stops with grass and wild flowers on the roof that encourage insects to pollinate.

In Poznań, you can already meet stonecrop stops, among others on:

Bernardyński Square (tram stop towards the center),
Łazarski Market Square (tram stops in both directions),
HCP (tram stop towards Dębiec),
Little Garbary.
- Thanks to the modern structure of the shelter and its green cover, passengers under such a roof will be cooler in summer and warmer in winter. Sedum also collects rainwater, increasing water retention in the city and relieving sewerage. And thanks to the fact that it absorbs dust and small pollutants, it helps in the fight against smog "- says the representative of the MTP Group responsible for public transport stops in Poznań.

The sedum covering the bus shelters is resistant to unfavorable environmental conditions and absorbs rainwater very well. It also reduces air pollution and dust in the area of ​​the shed by about 15-20 percent. During the summer heat, the temperature under the bus shelter is 3-5 degrees lower. Plants in the world absorb 7.3 kg of carbon dioxide per year.

Examples of implementation in Poznań 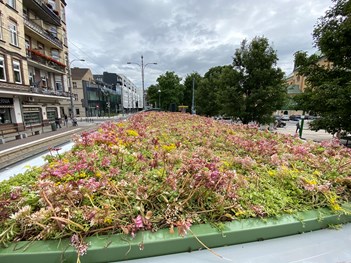 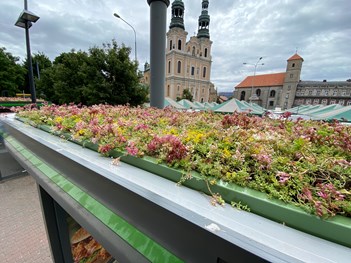 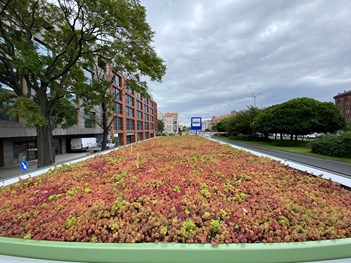 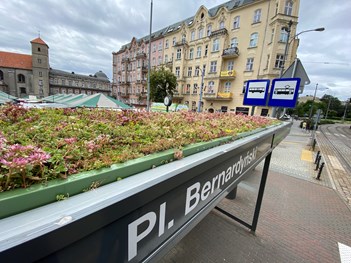 Danone is a new member of the B CORP movement